On The Eve Of The Romanian Revolution – Some Considerations (II) 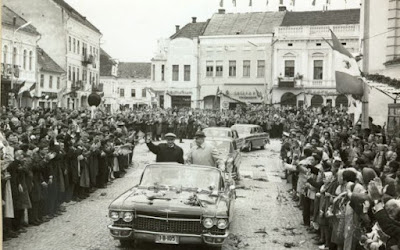 Preparing the Terrain for Violence[i]
One of the most effective allegations that could be leveled against Romania during the late Cold War was that of minority discrimination. However, the reason for the effectiveness of such allegations had less to do with exceptional minority abuse than it did the twin facts that, first, almost all states are organized to serve the wants and needs of their majority population primarily and, second, because of the near-universal tendency to favor members of one’s own ethnic, cultural or religious group more than “outsiders.” Thus, there is a discriminatory impulse embedded within virtually every state edifice and within the individuals that people it. Yes, there was minority discrimination in Romania. But was it official policy? And was it more egregious than elsewhere in the Soviet Bloc?
As a proxy for its no-longer-legitimate territorial demands on Transylvania, Budapest had launched a long-term campaign already by the end of the 1940s portraying Romanian authorities as abusing the ethnic Hungarian minority in that region.[ii] While those efforts fell on fallow ground, especially from the period of the show trials at the start of the 1950s and through the brutal normalization following Moscow’s suppression of the Hungarian revolt into the early 1960s, they re-emerged with a vengeance – and with the support of Hungarian-American organizations in the United States – during 1963-1965.[iii] By the start of the 1970s, the allegation that Romania was committing “cultural genocide” against its ethnic Hungarian minority became the battle-cry of officials in Budapest and was taken up by influential Hungarian-American organizations in the United States, most clearly and insistently expressed in the annual Congressional hearings on Romania’s Most Favored Nation status, newly-conferred in 1975.[iv]
Repeatedly during the 1970s and early 1980s the U.S. Congress and U.S. State Department conducted separate inquiries and investigations into alleged brutality and discrimination and, just as frequent, assessed the allegations as without foundation. Paradoxically, throughout the 1970s, Romanian treatment of its ethnic and religious minorities rivaled that of Budapest in its permissiveness. Leading Hungarian-American organizations in the United States, also sharing Budapest’s belief in a need for a reconsideration of the Romanian-Hungarian border, were not swayed by evidence to the contrary, particularly since allegations of Romanian abuse against ethnic Hungarians conformed to much older cognitive biases.[v]
The persistence of these allegations and the political influence of those making them prompted the U.S. Administration and U.S. Congress to launch their own inquiries. As the State Department noted in June 1980:
We also reviewed concerns regarding the treatment of national minorities, in particular the Hungarian ethnic group. In this connection US Embassy officers have again visited areas of Romania with a large Hungarian-speaking population. While it appears that instances of discrimination at the local level exist, our Embassy assessment indicates that there is no evidence to support reports of a policy of discrimination by the Romanian Government against Romania's ethnic Hungarian minority.[vi]
Likewise, a Congressional study group from the Trade Subcommittee of the U.S. House of Representatives Ways and Means Committee was sent to Transylvania in late April 1980 to investigate Hungarian and Hungarian-American allegations of brutal minority repression. The group, led by David Rohr, visited Târgu Mureş, Sfântul Gheorghe and Cluj-Napoca, and met with a broad range of community leaders, including Karol Király.[vii] The Congressional inquiry concluded that there was no observable evidence of “cultural genocide” nor did Romanian state authorities “ appear to be suppressing [the Hungarian minority] in a direct manner as a matter of policy.”[viii]
With the dually named Committee for Human Rights in Rumania/Hungarian Human Rights Association (CHRR/HHRA) in the vanguard, several Hungarian-American organizations sought to discredit these investigations as having been manipulated by Romanian authorities.[ix] For example, insisting that ethnic Hungarians in Romania regularly informed his organization of gross discrimination and abuse, CHRR/HHRA leader Laszlo Hamos then argued tautologically that his sources should be trusted because persons suffering such gross abuse would be unlikely to prevaricate. Senator Charles Vanik, one of the sponsors of the amendment linking more liberal emigration policy with MFN status, underscored that, on the contrary, first-hand observations and inquiries by U.S. officials were more persuasive than the hearsay accounts offered by the CHRR/HHRA and other individuals and organizations.[x]
Hamos countered that his sources be given precedence over the findings of Congressional study groups (or State Department investigations) since “most of the elements of discrimination and denationalization campaign in Romania do not lend themselves to on-the-spot observations, especially not by highly exposed Western delegations whose every step is carefully watched either overtly or covertly.”[xi] Therefore, Hamos argued, the U.S. Congress would be better served by relying on the writings of “several local dissident Hungarian leaders” – published in English translation – and “instead of relying on secondhand observations and generalizations by foreign delegations which visit Transylvania under restricted circumstances, to pay close heed to those voices which emanate from within Romania itself.”[xii] During the first half of the 1980s, the degenerating internal situation and increasing isolation of Romania lent credence to such allegations, which now encountered diminishing Congressional and State Department resistance.[xiii]
By 1987 the theme that Romania’s allegedly brutal treatment of its minorities was about to result in an outbreak of ‘justifiable’ terrorism in Transylvania was vigorously pressed and widely disseminated by Bloc-wide active measures. For example, the largest circulation Finnish newspaper reported that ethnic Hungarians in Transylvania were being “be converted to terrorists” and would soon “begin hitting international targets,” just like “the Basques, Armenians and Palestinians, because domestic oppression” meted out by authorities in Bucharest made terrorism “a logical alternative.”[xiv] 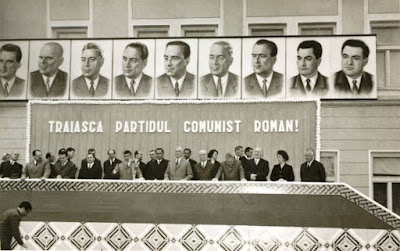 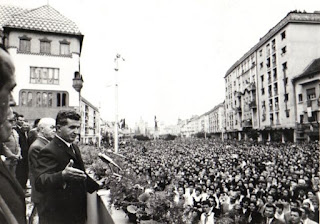 The Hungarian Embassy in Romania continued to disseminate these active measures just as it had when former Hungarian intelligence chief Sandor Rajnai was Ambassador in Bucharest (during  brought János Fazekas, an ethnic Hungarian and former Romanian deputy prime minister, to a meeting Szűcs had arranged with the Israeli Ambassador in Bucharest. The meeting was extraordinary, and not only because it revealed official Hungarian sponsorship for separatist militancy in Romania. Since Hungary did not even have diplomatic relations with Israel such a meeting would have been impossible in any other Warsaw Pact state.
1978-1982). In 1988 Hungarian Ambassador Pal Szűcs
Szűcs and Fazekas recounted the tale of “cultural genocide” to the Israeli diplomat, insisting that Romania’s “alleged anti-Hungarian ‘repression’” was akin to Nazi-era anti-Semitism and predicting that it would compel ethnic Hungarians in Transylvania to rise up and cause blood to “flow in the streets.”[xv] Budapest maintained this apocalyptic line even after 1989, predicting an inevitable “system of violence” that would result in the “killing of people, massacres – from ethnic cleansing to certain kinds of persecution,” and “uncontrolled migration within the region and out of the region,” if autonomy were not granted Transylvania.[xvi]
Szűcs cultivated the Israeli Ambassador partly in order to drive a wedge between Tel Aviv and Bucharest and advance the general goal of isolating Romania from its international partners, and partly for the specific goal of undermining Romanian efforts at advancing the peace process in the Middle East.[xvii] The extravagant likening of the plight of the ethnic Hungarians in Romania to that of the Jews during the Holocaust was one way of pursuing these goals. Another was to orchestrate the condemnation of Romanian minority policies by leading rejectionists in the Palestinian Liberation Organization as a means of discrediting Bucharest’s involvement in Middle East mediation.
Demonstrative in this regard was the August 1988 interview that Yasir Arafat’s security intelligence chief in the PLO, Abu Iyad gave in English to the Hungarian Press Agency MTI for English-speaking audiences.[xviii] Employing Budapest’s now standard allegations of “cultural genocide,” Iyad called for Romania’s exclusion from the Middle East peace process.[xix] Iyad, a vocal supporter of the Arab Rejectionist Front, was working constantly to block Arab-Israeli negotiations at the time. His attitudes and behavior were well suited to his recruitment by the KGB as one of its agents, code-named KOCHUBEY.[xx] Reportedly, Soviet authorities introduced the PLO security chief to the terrorist Ilich Ramirez Sanchez – “Carlos the Jackal” – while both were in Moscow in 1979, and the two conspired to assassinate the moderate King Hussein of Jordan.[xxi]
Iyad could not have been more explicit in signaling his purpose of discrediting Bucharest as a mediator in the Middle East.  After accusing the Romanians of committing “a sin” against the Palestinians by allegedly treating “the Transylvanian Hungarians as cruelly as the Israelis treat us in the occupied territories,” the KGB’s top agent in the PLO declared for the Hungarian Party’s press service that he was:
…at a loss to understand how a socialist country can take such drastic measures as the razing of [Hungarian] villages, which has nothing to do with Marxism and socialism. I would like to tell you that I have sympathy for the Transylvanian Hungarians, who suffer like the Palestinian people under military occupation. They are forced to flee from their native land, which is expropriated; their villages are destroyed; and they are deprived of their cultural and national identity.[xxii]
In fact, not a single Hungarian (or other minority ethnic) village was ever destroyed or modified in any way under the “systematization” program, despite Budapest’s continued insistence that it was a plan for “the destruction of Hungarian villages.”[xxiii] Despite scores of Hungarian press reports and articles, Hungary received no refugees from destroyed Hungarian (or Saxon or Serbian) villages for the simple reason that Ceauşescu had excluded Transylvania from the “systematization” process already in 1987, informing Budapest of his decision by 1988.[xxiv] Hungarian officials, and Hungarian-American organizations, simply ignored these assurances and continued to describe the program – which affected three ethnic Romanian villages between Bucharest proper and the main airport during 1986-1990 – as one designed for the “destruction of Hungarian villages.”[xxv]
Having set out this active measures theme, Iyad stated his view that:
[Romanian policies in Transylvania] bode no good for Ceauşescu's mediation between us and Israel, since a country can only act against oppression and hostilities after putting their [sic] own house in order ... If they are unable to solve their own problems, how could they help in settling the Israeli-Palestinian and Israeli-Arab conflict?[xxvi]
As one Radio Free Europe analyst observed, Iyad’s claim that Romanian mediation in the Middle East was “no longer desirable” and his attack on Romania in “such an emphatic, not to say exaggerated, fashion,” may have been prompted by some “special incentive” offered by “Hungary or the USSR.”[xxvii] It certainly did not reflect the perceptions or thinking of ruling elites in Israel and Egypt.[xxviii]