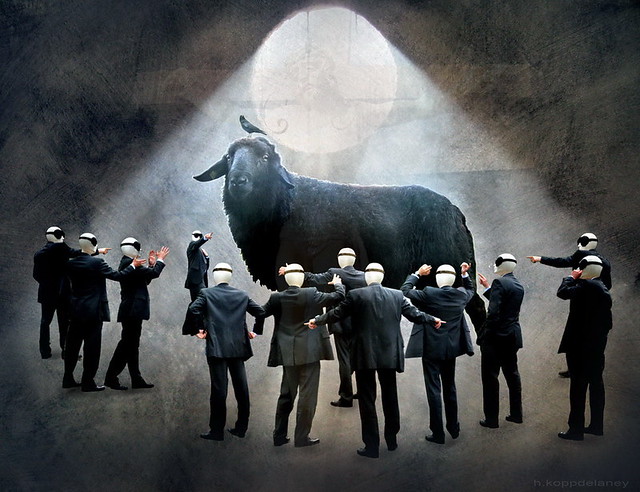 J.W.: Another topic not included in the Reader is your hypothesis about the origin of kings and gods. Would you briefly review it now?

R.G.: It is very simple. Scapegoating, when it becomes unanimous, affects the whole community. The crisis has been long; it seems the community is splitting or disintegrating.
Then all of a sudden it's over, and it's over because of the scapegoat. Who or what is responsible for ending this crisis? Who or what provoked the crisis? Here arises a problem that is the basis of what must eventually become interpretation and representation, though in primitive or originary situations the crisis and its resolution are still prerepresentational.
Now since the community is not aware of the mimetic nature of its scapegoating, it must look for a cause outside of the community. At this stage the community is humble. It does know its own violence, although it does not understand its source. Indeed, the conflict and violence are so overwhelming -- so seemingly "interminable" -- that the community does not believe its powers alone could have ended it, just as it does not know how it began. The only convincing answer in this situation is the victim: the victim brought the violence about; the victim ended it. The victim is bad, but the victim is also good. Bad because he or she is blamed for the crisis, but very good because her or his death ends the crisis. This is experienced as so effective that the whole chain of events becomes a mechanism repeated in ritual. In order to repeat the scenario, it is necessary to have a new victim, a substitute, to whom is imputed the behavior that caused the original crisis. The killing of this victim we call sacrifice. But let us imagine what could happen. The repetition of sacrifice is going to evolve, evolve I think in two possible directions. Either the victim will be sacrificed immediately or there will be a waiting period, the victim being already earmarked and present in the community. In the latter instance the victim is alive in the community and already sacred in anticipation of his death. Rather than becoming a god, which I think is what happens when the victim is killed promptly, the victim whose execution is postponed, for any reason whatever, has the opportunity to gain power over people, due to his sacrality. I think the victim in this case eventually becomes what we call a "king." This, by the way, would be a model for how representation evolves out of ritual. You have first the spontaneous unanimity through the victim, then many sacrificial repetitions of this model, and then, eventually, representation in the form of new offices, institutions, etc. So here you have two types of representation: one in which the victim becomes what we call a "god"; another in which the victim's execution is delayed and, in many instances, the victim may be smart enough to capitalize on the sacred powers ascribed to him. The latter is what we call a "king," the origin of political power.
[...]

R.G.: Yes, that is very important, the practice of taking by lot. It reflects some awareness of scapegoating, its randomness.

J.W.: Would you clarify "randomness"?

R.G.: Well, there are preferential signs of victimization which I delineated in The Scapegoat. In a crisis communities look for someone to blame for the worst crimes imaginable, and we see a common pattern of picking on those people who are marginal or different in some way that doesn't fit the system of differences in the community; perhaps they are foreigners. Perhaps they have lost an eye like Wotan; perhaps they smell bad like Philoctetes. But these preferential signs don't absolutely have to exist. In a crisis there will be an inexorable movement toward finding a scapegoat.

J.W.: So the one necessary condition is vulnerability?

R.G.: Sure, you can say that as a generalization, but vulnerability is relative; it depends on the situation in the community. If the crisis is moving toward a frenzy, a turbulence of Dionysiac proportions, there is less and less need for preferential signs. When a mob is really frantic, the slightest incident will be interpreted as a sign of someone's guilt. Our approach to collective crises should be extremely fluid, in keeping with the fluidity of mimesis itself. Now of course there are clearly features of disability or abnormality that tend to play a role in the designation of the victim -- Oedipus's limp, for example. This is what I mean by preferential signs.
On the matter of preferential signs, take the Venda myth of the snake god and his two wives. It is the second, younger wife who is accused of witchcraft. So I speculate that it is her second wife status that makes her vulnerable to the witchcraft accusation. The second wife status is a preferential sign of victimage in this particular myth, but not necessarily everywhere.
So if some sort of marginality or vulnerability is present in the myth, so much the better. The evidence of such signs piles up. But it is not absolutely necessary to the identification of a "scapegoat."
[...]

R.G.: This is true, but I do not single out historical Christianity as the sole culprit, as many Christians seem to believe. I am just repeating what Paul says about all of us being guilty so that God can save us all. Concerning the Jews, the complexity of the New Testament texts is never recognized either by hatemongers and persecutors or by critics and theologians caught up in the cult of PC. We have already noted that Peter says to the Jewish crowd in Jerusalem, "And now, brothers, I know that you acted in ignorance, as did also your rulers." The Jews are implicated no more than the minions of Caesar or lynchers all over the world. Therefore one cannot say that all the Jews in Jerusalem were innocent of Jesus' death while the Romans were guilty. If to implicate some of the Jews also in Jesus' death makes the New Testament antiSemitic, well it would make just as much sense to hold that it is antiBritish to condemn the burning of Joan of Arc. Because no one, no, not one, can escape implication in the death of the one who died for all. And then all lynchings are alike as well, whether they take place in Palestine during the Roman Empire or in the American South after the Civil War.
Even Euripides will tell you in The Bacchae that Dionysus was right and Pentheus the victim was wrong to rebel against the god.
Or take the myth of Purusha in the Vedas: he was killed by a great crowd of sacrificers, and out of this sacrifice the three great castes of India appeared. The parts of the body were divided, with the head as the higher caste, then the chest as the middle, warrior caste, and finally the legs as the lowest caste. Now the myth does not tell you Purusha was guilty, but it doesn't tell you he was innocent either -- and this is what the Gospels alone tell you, that Jesus was innocent. "We were wrong," says the New Testament community, "to the extent that we were involved in that."